Chapter 15 - Update #7 - January 24-27, 2013
Thursday we finally had the morning devotions at the hotel!!  I missed having those times with the staff.  They had not started up the devotions since the beginning of the year.  Again, because of scheduling conflicts they were finding themselves without the half an hour of fellowship & prayer.  Even though they said they were arranging the devotion time for my last two days there, I quickly responded that this was their time.  Every group that I have brought to the hotel has always commented on how much that morning devotion times means to them.  Pray that the hotel will be able to work out their scheduling.  They are trying to have it three times a week.  They had me speak at the devotion time on Friday. I used the two devotions from Jesus Calling which focus on pushing back the demands of the day to spend the time with Him.  He will bend time for us when we choose the right thing.  From February 10, “You will find that you can accomplish more in less time after you have given yourself to Me in rich communion.”  That is a lesson we all need to hear.  But the last place that I thought I would have to share this was in Uganda.

We were finally able to visit our land on Thursday!  This time we were bringing the first batch of tree seedlings so we had to travel by car.  I am used to going to the land by boat which is so much faster.  But it was also good to go by car this time to see the rest of the surrounding area. 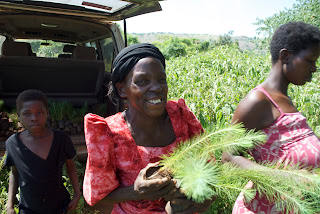 Having Pastor Gerald there with Robert was important as they continue to make plans in my absence.  Pastor Gerald has done much farming in the past.  He knows so much more about agriculture.  It is exciting to see how God is using his gifting as we prepare to make the plans of how to utilize the land.

We have a caretaker on the property that we are allowing to use part of the land for growing crops.   We will be working together with him to grow other types of food.  We will soon have a supply of food that will help cut down our current food costs.

The first set of tree seedlings have just been planted.  Because it has not been raining this month, we are waiting to hear if we should plant the second set.  We are solely dependent upon rain for the crops.  Please keep this is prayer.  The trees will be used to line the property.  In 2-3 years they will be cut and sold for firewood.  Firewood is becoming a hard thing to find.  This will become a self-sustaining income for us. 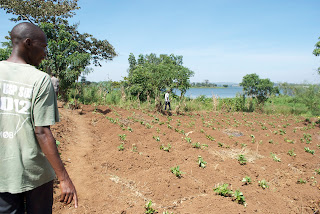 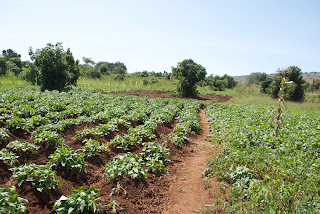 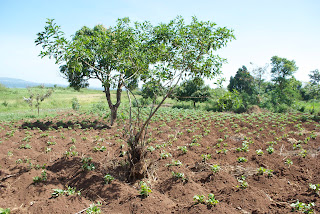 This is phase one of the use of the property.

As we drove back out, I was reminded of the first time I came to Uganda.  This village that we drove through had huts that were more spaced out than the village of Kakira.  It is more of a remote area.  But as always, children would all wave and smile as we drove by.  As I sat in the van I pondered this question, “What benefit will Raining Hope have coming here to this land?”  “What is it that we can do for these people?”  This is more than just having property for our home and our children.  Why are we here?  What purpose did the Lord have in bringing us to this land?  We continue to seek the Lord’s guidance and direction. 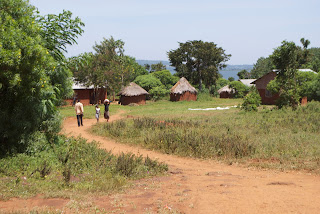 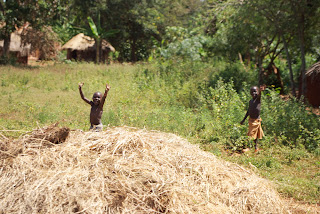 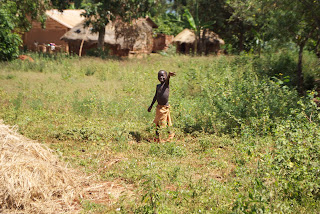 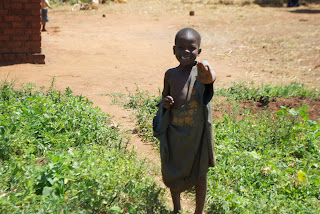 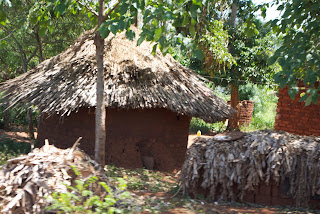 I was able to spend more time getting to know the children that come to see me every time I visit.  None of them speak English.  Robert was able to interpret for me.  I was introduced to each one.  They know my Ugandan name, Kisakye (God’s Grace).  They were very pleased to hear that and seemed to identify more with me.  Something was very different about this visit.  I began to see the land with new eyes and a new heart. 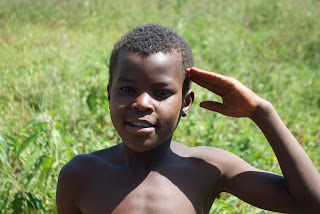 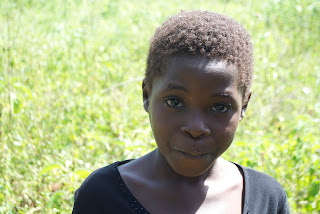 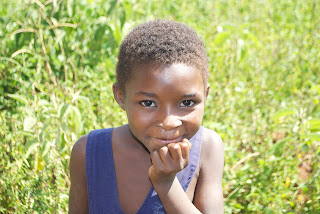 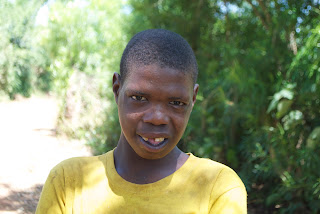 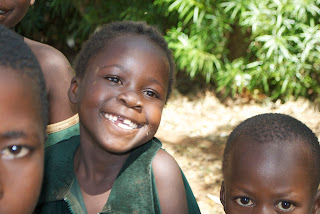 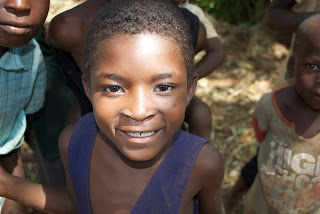 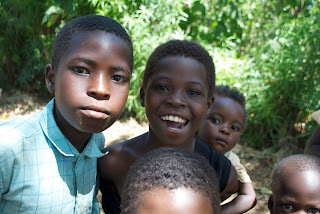 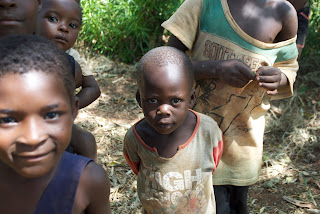 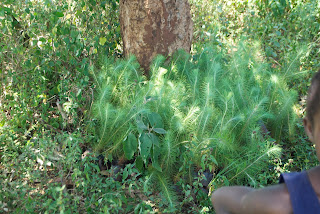 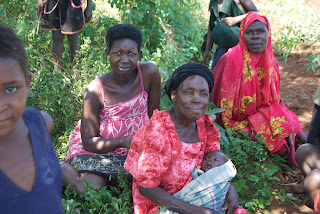 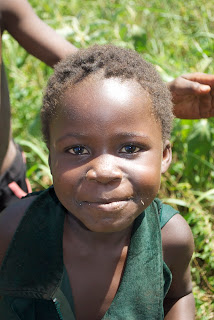 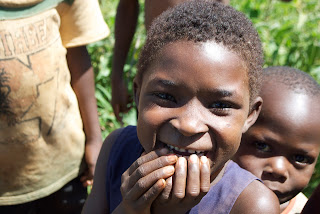 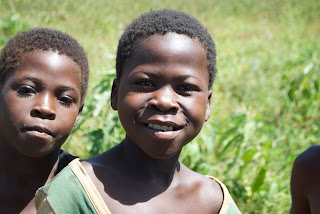 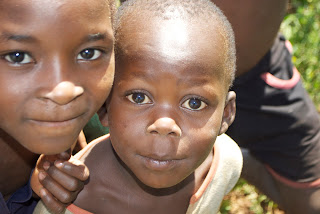 The other divine appointment that I had was at the hotel.  I was introduced to a pastor just a couple of days before I left.  He is from Alabama and comes every year around the same time I am there.  I think that our trips normally are just days apart. But because I came a couple of weeks later this year, our paths finally crossed!  His name is Pastor Ken.  We quickly realized how God had orchestrated our meeting.  He had a pastor here from Zimbabwe that was doing some training in the area of agriculture.  They have a program that involves “growing God’s way.”   Again, another area that we are in need of expanding.  God sent us the right person to talk with.

Pastor Bob from Zimbabwe wanted to come with us to the land.  He actually came to our home on Saturday as we waited for Robert to come and take us.  This was another one of those flexible moments.  What we thought was going to happen that day never did materialize.  Robert actually got into an accident (he is ok) in Kampala.  He got detained and was not able to come and take us.  Problem was we didn’t get that word until hours after we were suppose to leave.  But the Lord’s plans always work out for better.  Pastor Bob was able to spend time with us and the children at Raining Hope.  When we discovered that Robert wasn’t coming, we switched gears and had a devotion time with the children.  Pastor Bob was able to praise the Lord with us in song and prayer.  Since it was my last evening there, we also had our traditional soda party!  He was thrilled to be a part of our time together as family.  He said that he was impressed with the love that exists in our home.  He wasn’t disappointed that we didn’t go to the land.  We all confirmed that all things work together for His good.  God’s plans are not our plans..and His plans are always better!!! 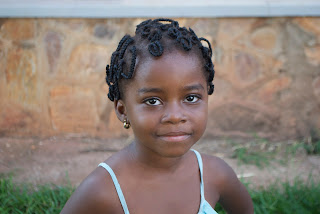 I spent one last day in town seeing Rita & Baby Eydie!  I also was able to Baby Eydie's sister, Mary!  My friendship with Rita actually began 5 years ago when little Mary befriended me!
I ended up leaving on a Sunday so I was not able to attend church.  But I did see Andrew & his family as they prepared to go to Revival Christian Church! 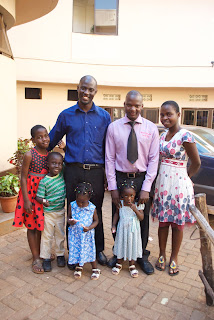 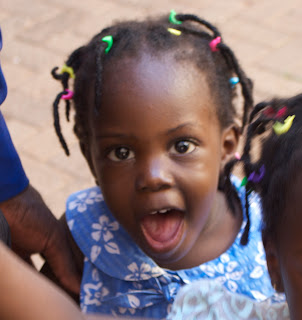 Something else that happened this week was an encounter with one of the street kids that I have written about in the past.  He is about 15 years old.  He lives on the streets in Jinja.  He makes a living by selling various household items.  About a year ago I began just buying bread, juice and margarine for him to eat.  When he saw me in town he told me a story of how the night before the street children were being harassed and threatened to be put in jail.  He was trying to find a way to rent a small room so he could be safe.  The amount was only 20,000 shillings a month.  He needed 3 months worth to start off.  This amounts to about $25 USD...not each month but for all 3 months.  God directed me to help him.  He secured a receipt for me so I know that they money went for a place.  You should have seen how happy he was that he would have a place for 3 months.  When I asked him what he would do to stay in a safe place, his response was that he will continue to work to earn the money.  His problem has been coming up with 3 months all at once.    Pastor Richard was with me when this young boy came to give me the receipt.  He said, “This one is genuinely happy.”  I found out on this journey that Pastor Richard also was a street kids growing up.  If you look closely at the photo you will see children sleeping next on the right hand side of the photo.  Pastor Richard said, "That was me growing up."  You would never have known that seeing him today.  But somewhere along the way, someone helped Pastor Richard and gave him a chance.

So, what does your support to Raining Hope do?  You help to bring hope to the hopeless.  You are helping to provide shelter and safety.   You are making the difference in the lives of those we are called to serve.

I want to thank you for going on this journey with me.  I actually came close to missing my flight!  We were delayed in Kampala and just made it in time to Entebbe.  It was one of those times I walked up to the gate and walked right onto the plane!  Cut it a little close!   But each and every time the plane lifts off the ground I become emotional.  I leave one land to return to the other.  I am privileged that I have two places that I can call home.

Most of all keep us in prayer. I sent out the prayer list to you yesterday with our current needs.   In the days to come as the Lord continues to reveal His plans we will be faithful to share those with you.