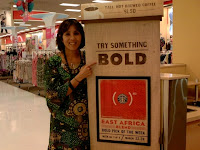 Thank you for your prayers. I am sending out a separate email regarding Raining Hope and our Uganda ministry
Posted by Eydie Miskel at 11:27 PM