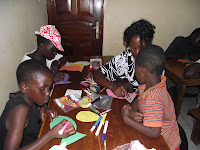 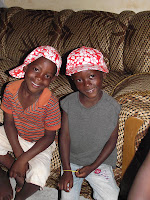 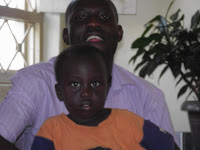 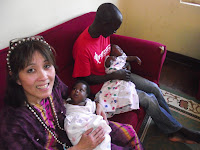 
While at the home I was able to go through supplies. When we moved we threw all of our art supplies and games in the suitcases. They have remained that way until I arrived. It was nice to organize everything and put them in the cabinets. With the new house we have a lot of storage space in the room Solomon is using.
During the devotion time, Godfrey showed up to spend time with us. As he listened to me share with the children that night about being excited to meet God in the morning, he was amazed. He said that this morning God confirmed the same messages. God showed him clouds today too and showers of blessings to come.

When we went back to the hotel to have dinner, tonight it was VERY SLOW FOOD! It was so slow that the two of them had to have the food packed to “take away.”

We are experiencing His abundant peace! He has kept us safe! He is raining down His hope and joy.

Prayer Requests:
1) We are accomplishing a lot. With only a few days left, continue to pray we utilize the time well.
2) Solomon & I will be meeting with schools and looking at the needed funds for school fees. Pray for a smooth transition and for the needed funds. The first term is always more expensive as we need to buy new uniforms, supplies, etc.
3) We are coming to the solution to the managing of the home issue. Continue to pray God gives us the final confirmation. God is good.
4) We are still trying to work out the schedule to visit the land before I leave. Robert’s schedule has been full and he still is recovering from his illness. Pray that God makes the way possible.
5) Praise the Jonathan has been healed! Praise that we will soon get new mosquito nets.
6) Pray I continue to have my alone moments with God to seek His direction and discernment.
Our children send their greetings and love to you!
Kale,
Eydie
Posted by Eydie Miskel at 9:02 PM