Thank you for waiting for the next update!  I can not quite believe that it is already Sunday!   This week has just flown by.  As I write it is currently Saturday,  January 7th.  I am trying to grasp all that God has done.
Most mornings I stayed at the hotel trying to catch up on work.  But I do most of it outside at the restaurant on the patio to make myself available.  It is one of the main reasons why updates take longer to publish.  I am spending time with people whether at the home, hotel or in town.  This trip I had more conversations than normal with those who just come up to my table.   I had strangers come and introduce themselves to me.  I had Ugandans who came telling me about their own ministries.  Some were in search of support.  I talked to Godfrey about this because people don’t normally ask me for financial support.  He said because of the crisis in the country due to the drought, many people are becoming desperate.  They are searching for funds anywhere and anyway they can.
Monday, Wednesday and Fridays I start my morning by sharing during the hotel’s morning fellowship.  This is absolutely one of my most favorite things I do here at the hotel.  I love that they aside these 30 minutes to start the day praising God together.  When I am here they have me share a word of encouragement from God’s Word.
This time I took what I shared on New Year’s Eve and New Year’s Day regarding Psalm 65:11 and split it up into three sections.  Mr. & Mrs. Otile were there on the first day.  After I shared the song,”Beautiful Day,” by Jamie Grace,  Mr. Otile said, “We need to play that song at the start of everyday!  Everyone was up out of their seats, singing, signing, and praising God!
But this week had a surprising turn of events.   When they came on Wednesday, it was a good size group that wanted to hear the next part of the three sections.  They were excited about coming back on Friday.   Thursday night, I happened to run into one of the staff who told me that they moved the normal Friday morning devotion.  They would instead meet from 2:00 pm-5:00 pm for a special “Thanksgiving Fellowship.”   She said they hoped I would come to that instead of the morning fellowship.  I know on Saturdays their fellowship time is slightly different, lasting a couple of hours with prayer and worship.    I assumed it was something to that effect and was thankful I had a heads up.
When I woke up on Friday morning, I was thankful for the extra time I had in my room.  I was able to study and get things ready for the day.  I was having my coffee, in my PJ’s, working on the computer when my room telephone rang at 8:30 am.  On the other end was one of the ladies from the restaurant.  “Good morning,, Sister Eydie.”  After the normal greetings she then dropped the next statement, “We are waiting for you.”  I thought she meant breakfast which was odd because there was still an hour and a half left before they stopped serving.  After replying, “Ok, I will be down soon,”  came the reply, “We are waiting NOW for you.”
The confusion over why they wanted me to eat now quickly turned into the realization that they were waiting for me to come lead them in the morning fellowship!   Because they wanted me to continue in the three day teaching, the cancelled morning session was reinstated but no one told me!   You should have seen how quickly I threw myself together…actually maybe not!   Good thing I already had the lesson done, but I had to quiet my frazzled heart!
What amazed me was for something that was cancelled, it turned out to be the largest of the three days!  When I finished up that morning, I said the enemy tried extremely hard to stop our time together.  But each person there needed to hear something that was said that it became very personal.  Later that day I did have specific staff members share what they had learned and how excited they were to apply those truths to their lives.

I was again reminded by the same woman who called me at 8:30 am to attend the Thanksgiving Service at invitation of Mrs. Otile.  I had to do some adjusting to our schedule in order to make this work.  But I thought it would be important to make a quick appearance before heading to the house.
Godfrey and I first went into town to buy some clothes for all of the students in the home.  As one part of their Christmas gift from their sponsors, we were able to go and buy skirts, trousers and shirts!  It is amazing to see how grateful they are to have a new piece of clothing.  We are also not talking about clothes from a department store.   We do all our shopping at the local market which is more like a swap meet.  This is our normal way of shopping and we were able to find something nice for each one of our twenty seven students plus the staff. 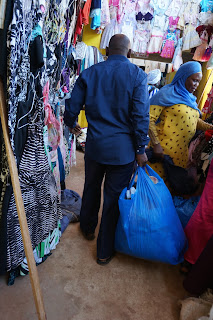 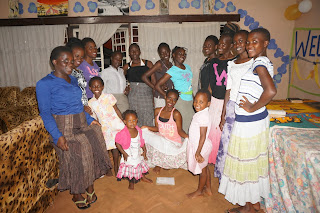 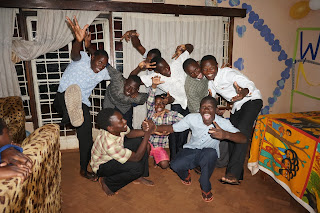 By time we finished it was closer to 2:30 pm.  I wanted to make the quick stop into the fellowship.  Godfrey questioned whether he should attend or just wait for me.  That was odd because he knows that he is always welcomed to anything at the hotel.  I discovered the real problem was he said he was wearing only sandals not dress shoes!   I told him not to worry because I thought it was a simple prayer/worship time and we could easily greet and then leave. Still trying to work his way out of it, I said in America when invited to events we would say he is my “plus one.”  He got a good laugh about that and we headed towards the meeting hall.
What happened next was something out of a movie scene.  There was someone at the door to greet us.  When the double doors opened it revealed a room filled with about 150-200 people!  Quickly accessing the situation, I wasn’t quite sure what in the world we walked into.  Apparently they had just finished a time of worship.  When I looked at the front of the room there was a head table with Mr. & Mrs. Otile, Robert, Andrew, Denis and a couple of other guests who turned out to be two pastors.
I wanted to slide into a seat in the back.  Silly me.  Mrs. Otile from the front said, “Mama Kisakye!  Please come up front.  We have a seat for you.”  Do you want to know what one of my first thoughts was?   “Oh no.  Godfrey’s sandals!”  When I looked back he was just entering.  He told me later that when he saw all the people he was going to stay outside.   Took some persuasion from the people at the door to push his sandaled feet in!
Apparently what we walked into was an annual event they hold at the start of each new year.  It is for all staff and anyone who works at the hotel to come.  As a hotel they basically stop working to come and thank God for the previous year and look forward to the new year.  Together they honor God and start the New Year giving Him glory.  It was actually an amazing gathering.
Mrs. Otile introduced all of the heads of departments which helped me tremendously.   I have been coming there for ten years now.  Even though they have become my family it has taken years to figure out what some of them really do here!   When Mr. Otile got up to share, he first recognized me as part of the hotel family.  He wanted me to give a word of encouragement for the New Year 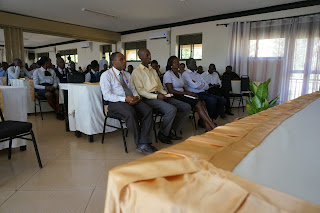 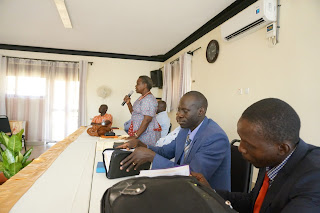 Those moments that followed were quick and brief.  I recognized Godfrey who was sitting way in the back (hiding his sandals!).  Godfrey told me later if Mr. Otile would have tried to call him to the front to give a greeting, he was going to reply, “Thank you so much but I am just the plus one!”  How quickly he learns!  That gave us a good laugh later when we talked about the shock of what we had gotten ourselves into!
But during my few moments of sharing, I realized what a privilege it was to be considered part of this wonderful family.  It was an honor to have a few moments to encourage and thank all who were there.  Since Mr. Otile loved the song, “Beautiful Day,” he was more than happy to have me finish my time signing this song..  Everyone participated by standing up and signing, singing, and clapping right along.  Godfrey told me that everyone in the back of the room were filled with so much joy that they just broke out dancing!  It truly was a beautiful day!
By now I realized I was not going to be here to just make a quick appearance, especially because they had me sitting at the front table.   I think Godfrey realized this before I did!  He had someone bring me a note asking if he could leave me here while he went back to the house to lead the Bible study we have for the community on Friday nights.  That ended up being a good call.  There was still a couple of hours more of the program.  Both of the pastors who were there had full messages that were very inspiring.  We also had an important time of prayer of dedication for the new year that I would not have wanted to miss. 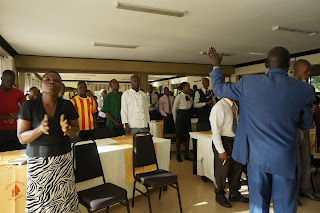 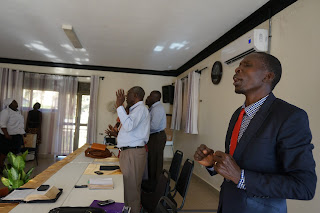 The other special honor was being there to witness the retiring of a dear friend, Sam.  He is the brother to Mrs. Otile.  He made such a wonderful speech that was also quite funny.  He said he would rather go when it was late afternoon in his life rather than evening!   He actually had two brothers who have passed away and that leaves no one to care for both of those homes.  His retirement was to go and help his families in the area called Lire.
We then had a feast.  They had prepared a meal for everyone in attendance.  But then Mr. Otile did something that sets this hotel apart from all others.  He said that as the head of the organization wanted to serve the least of these.  He went to the serving tables and then served one of the young men who I think works in the maintenance area.  It really was something inspiring to witness.  These are very humble people who reflect Jesus in all they do.
By time it was all said and done, I think Godfrey came back to get me at 8:00 pm!  I felt like I was starting another day when he came back!   We still had more to come that night!
The remaining updates will be about the discipleship time with Raining Hope, the special trip we took for their Christmas gift, and the amazing Sunday service we had on January 8th.
Still celebrating the New Year!