I am happily sitting at the restaurant at the hotel catching up on updates.   There were dark clouds forming in the sky.  The thunder was roaring deep in the distance.  The wind started blowing slightly through the restaurant which is an open air patio.  Lydia, one of the servers who takes such great care of me asked, “Are you not cold?”  This was perfect weather for me but a little too cold for them!  Then all of a sudden, I heard the sound of drops of rain on the metal roofing.  I was so excited that God was answering our prayers of rain for the nation.  But He answered in a big way!  All of a sudden the wind began to rush through the patio so strong that the tablecloths were flying off the tables.  The slow drops of rain began to quickly increase.  Combined with the strong movement of wind, before I knew it Lydia and another server rushed to help me move to the newer addition of the patio where they can close the windows.  It started happening so fast that it was an exciting state of emergency!  We were all laughing and filled with joy to the HUGE answer to prayer!    It is just now starting to let up.  I looked over at the area of the restaurant where I was sitting and it is completely covered in water.  One of the workers just came over with a squeegee mop to start to push the excess water over the side.  What a beautiful 30 minutes we just experienced being showered with blessings from above!

This morning as I was in the restaurant, one of my friends here at the hotel, Willie, came to to share a New Year’s greeting.  Everyone I talk to has said how it has been TOO HOT and very dry for months.  He pointed out the land across the Nile River.  As I looked, I saw the reality of the drought.  The hills that are normally lush green have turned brown.”  I am used to that in California but have never seen that here in Jinja.  All of the maize crops have dried up due to the lack of rain.   It is one thing for me to hear about the drought and famine.  It is completely another story for me to experience for myself how it is affecting this nation.  There was a little humor in all of this.  One of the workers here said, “It has been TOO HOT!  That is why our African skin is so dark!”  It caught me off guard and we both got a good laugh!

I also saw how it is directly affecting us at the home.  Godfrey and I spent part of Saturday in town shopping for food.  We were buying supplies for the month as well as for our New Year’s Day/Christmas/Birthday feast!  Because we had a limited amount of money come in before I left, I had to buy our food in stages.  I was shocked to find that every item that we bought had increased in price from our budget.   He said it has been happening steadily as the drought has gotten worse.  The sugar was the biggest surprise which had DOUBLED in price.  Godfrey said in the hardest hit areas the sugar is tripling in price.   Continue to be in prayer for the nation as this really is a widespread crisis.

When Godfrey picked me up on Saturday,  he immediately said, “I have a testimony!”  He seemed to be very excited.  He explained when he left for the airport to pick me up, he was concerned because the tires on the van are starting to get worn down.  He took the van in to be serviced before leaving on the long drive.  His concern was warranted and was cautioned to drive carefully.  As we drove home he told me about the tires but wasn’t concerned there would be any problems.  He just wanted to explain why he was driving a little slower!   The next morning when he woke up he was prompted to go and check the tires.  One of the tires was completely FLAT!  He praised God that we made it all the way home without blowing the tire.
When Godfrey took the van to the shop, the man looked at it and was shocked.  He said, “How far did you come on this tire?”   His reply was, “Entebbe Airport.”  The man said, “Wow!  No wonder you are a pastor!”  He was meaning that the tire was so bad that it was a miracle we made it back.   We are now using the spare tire and we are able to get around town.  The house is only five minutes away from the hotel.  Thankfully, all we are doing is basically from the house to the hotel.  Please keep us in prayer as it is time for us to replace the tires.  The cost is roughly $560 for four tires and balancing.
Now that the van was loaded down with food, he was worried it was putting too much pressure on the tires.  So he left me in town to visit my friends while he made a run home to drop off the food.  I surprised all of my friends with a New Year’s greeting as they thought I was coming mid January!
Godfrey then came back to bring me to the hotel while he went to get things ready for our overnight New Year’s Eve program.  It was good because it gave me time to get my things together.  He wanted me to share the New Year’s Eve message to reflect on all that God has done this past year.  He then would share the first message of the New Year after midnight.   By time he actually picked me up it was closer to 9:30 pm (normal Ugandan time!)  When we drove in the compound there were only a few people who had arrived which was normal.  It was exciting to watch people come one by one and fill up our tents.  Godfrey actually had to rent TWO more tents to accommodate the excess he knew would come.  It was like the quote from the movie, “Field of Dreams.”  “If you build it they will come!”  At the height of the program, Godfrey estimated that we had 150-180 people!   He had invited another pastor and their church to join us that evening.  They actually had come from Wairasa which is about a 15 minute drive away.  It was a blessing to share the evening with them.  We had many others come from the neighborhood as well. 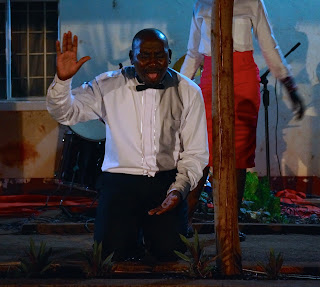 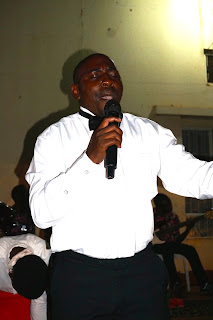 The children ministered in song and dance for the first part of the program.  They recently bought new uniforms because they had already outgrown the ones we had made for them.   They looked extremely “smart” which is a cultural saying for looking good. 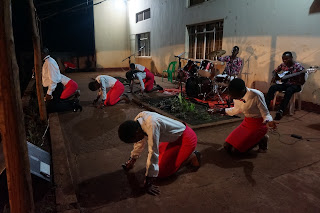 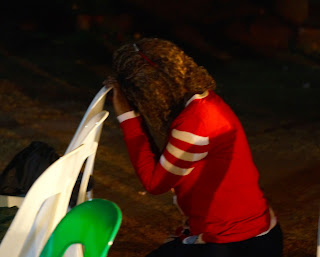 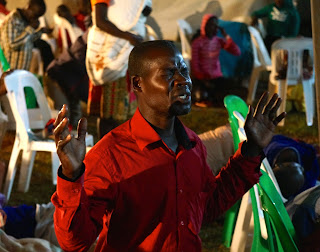 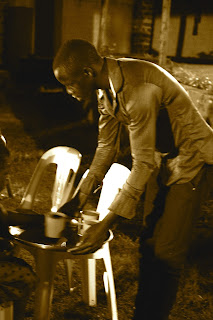 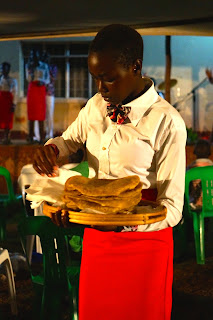 As things began to wind down, our children were still wide awake and I believe could have gone for hours more!  By time Godfrey took me back to the hotel, it was 5:00 am.  I was praising God I made it the whole night!   As I went to the room, and got ready to sleep for a few hours, a rooster began to crow!   It was a reminder that my body was a little confused as to what I was doing to it!
It meant more than I understood for me to come and start the new year off with the Raining Hope family.  Thanks to all of you for your support of my being here.
Tomorrow I will share more about what God did on the first day of the New Year! 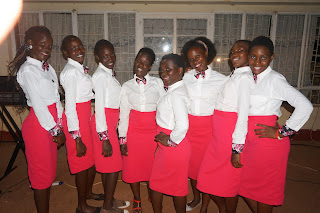 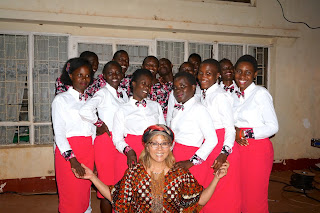 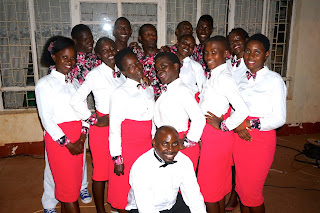 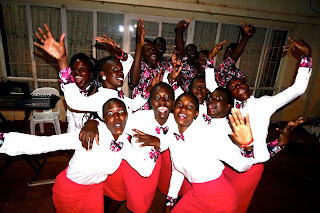 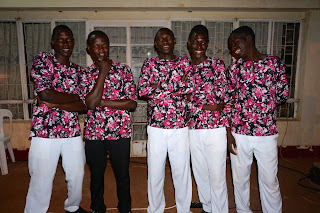 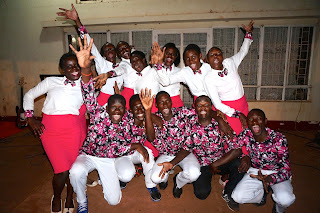 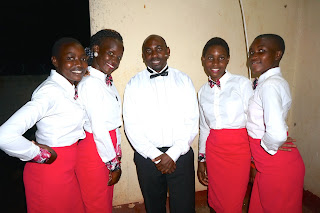