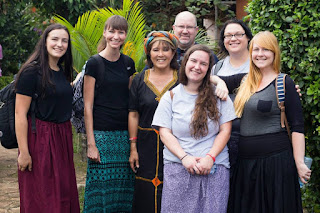 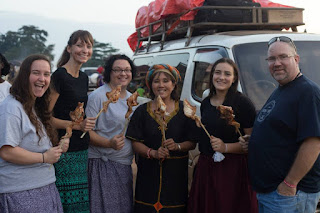 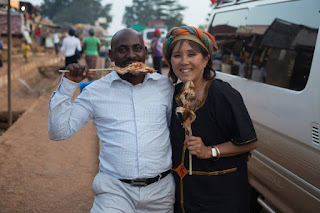 Today is the day that Godfrey and I would go to pick up the team in Entebbe!  They safely arrived last night and stayed at the same guest house that I was at last week.  Our plans were to leave Jinja after the early morning jam (traffic) in Kampala.  Turns out we were held up longer than anticipated.  Godfrey was still having problems picking up the luggage rack for the top of the van.  The power was out at the shop for two days where we were having the rack made.  Godfrey finally made a decision to ask them to let us borrow one so we could get on the road.  It actually turned out well.   Because of all that happened the past week, I was able to get a hold of Pastor Doug to ask him to have devotions and a time of training.  I knew that Wednesday we were going to be doing door-to-door evangelism with a church.  They were able to use the time while they waited practicing their personal testimonies!

Godfrey & I arrived early afternoon.  It was a joyous reunion for us!  The team was finally together! When I stayed there last week, I discovered that the hosts of the guest house had flags from different countries hanging in their breakfast area.  However, they were missing a US flag!  So I contacted Pastor Doug and asked him to bring one with him.  We were able to present them with a flag as a host gift from the team!  The US is now well represented in this little guest home in Entebbe!  They said they would put it in a prominent place!

Immediately we had to stop at a local hardware store.  All of the luggage fit on top of the van.  But we had to buy a large tarp to cover it in case of rain.  It was so interesting for me because we went down a dirt road that brought back so many memories.  On my very first trip, we had gone down this same road to find a tailor to make a dress for me!

As we got on the road, we caught up on stories from their traveling.  Since all of the team were returners (except Melanie) everything seemed very familiar to the team.  Melanie had been to Uganda once before with another group.  So she fit in extremely well!

On the way, we made our normal stop just outside Kampala at a Petro station to meet my friend, Sheila Kajumba.  Her son, Aaron and daughter, Becka are in Ventura.  I had things to deliver to them from her family.  Her other son, Isaiah was with her.  It is always nice to just give a quick hug and greet one another!

Normally, we try to work our way around the middle of Kampala.  It is the capital city and very congested.  It is my least favorite thing about traveling in Uganda having to go through the city jams.  But we had ordered Bibles that needed to be picked up.  The cool thing was we had someone picking up the Bibles for us in Kampala.  This was so we didn’t have to go into the heart of the city where the jams would have delayed us for over an hour.  We were able to use Mobile Money in Entebbe to send our friend the money.  He paid for and picked up the Bibles.  We arranged to meet in a different part of the city to get the Bibles.  Once he arrived on a boda boda, I realized that I knew him from our days at Cornerstone Church in Kakira!   It was a nice reunion!

The next thing that was on the team’s mind was the next stop.  it would be over an hour but they all knew that we would stop for chicken on a stick and roasted bananas!    I think with all the teams I have brought here, this team loves chicken on a stick the most!  They have been craving it since last year!   This time, I was able to go with Godfrey to the area where they actually are cooking the chicken.  It was good to see the people who we normally deal with.  Funny thing was last week when we went through, Godfrey got the phone number of a particular person.  We were going to be all cool and call ahead to make sure the chicken was ready for us.  However, when it came time to call, Godfrey couldn’t find the phone number!  Oh well, we tried!

The team was happy to have their chicken and bananas.  This is always the official welcome to Uganda!  Because we got such a late start, it was already getting dark by time we left the chicken area.  As we approached the familiar Nile River, it was already dark.  We had already decided to not go to the home until Wednesday so this confirmed it.

I had already checked out the rooms and left little welcome goodies on their beds!  So it was easy to get checked in.  I always feel sorry for the hotel workers who help bring our bags to the rooms.  The majority of the extra bags go to my room which is 3 floors up with no elevator.  But these workers are so strong they seem to climb the stairs so effortlessly carrying these 50 pound bags!

That night, we had a team dinner at the hotel.  We were able to talk about the events for tomorrow which would cause us to hit the ground running!   Wednesday especially would be a full day!

Another full day of travel for the team, but at least we were all together!!!

A quick update on Esther and Vivian...they remained extremely well for the duration of the trip!  Vivian had one moment on the last day that she was pretty weak.  But they truly have been full of energy and life.  It is great to see God do a miracle in both of their lives.  Thank you for praying!

Today (August 16th) I am going to Grace Fellowship to join them in worship.  I will be back at Saticoy Church in Ventura on Sunday, August 30th!

More in the next update...you will be so excited to see what God is doing!

For His Glory,
mama kisakye!