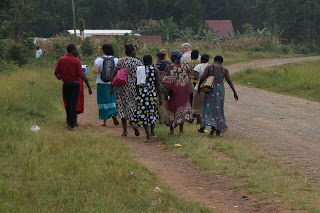 After our successful ministry at the school, we went back to the hotel to debrief the event and have a nice lunch.  I know I have talked about this before, but I have had the best Chinese food ever right here in Uganda!  When I travel, I love to eat the local foods.  Especially in Uganda, I LOVE and prefer the local foods.  I finally decided to try the Chinese food here after about trip #4 or #5 when I realized that this was my life now and I would be continuing to come here.  I thought, what could it hurt?  I discovered that it was some of the best Chinese food I have had anywhere!    Since then, I have been able to have cooking lessons from the chef that cooks this amazing food!   The team also came to love this food last year.  So it seemed appropriate that our first big meal at the hotel was our famous chinese food!  This gave us time to shift gears and get ready for the next ministry opportunity.  The benefit of writing these updates after having arrived home is that I can reflect on the trip as a whole and see the bigger picture of what He was doing.  I believe one of the things that had the greatest impact on this team was what we were about to venture into doing on the afternoon of our first full day of ministry. I had also been communicating back and forth for months with specific people that are connected to Glory Be to God Church where we would serve.  Raining Hope made itself available for whatever they needed.  Instead of telling them what we could come and do, I basically said, “How can we serve you?”  Again, it was not until the day before the team arrived did I get that answer.  As I met with Mrs. Otile, Pastor Prossy senior pastor of the church and deacon Andrew, the question still was, “What is it that you would like to do?”  I responded, “We are here to serve and will do whatever you need.”  Their kind response showed me that they did have a need but they were willing to put that aside if we came with a plan.  Such kind and godly people they are!  They finally said, “Well our committee has been meeting and we have determined that what we would need the most is for your team to do door-to-door evangelism sharing the gospel with those who live in the surrounding village of the church!”  I answered, “Great!  Then that is what we will do!”  But my mind flashed to the team and how they would react to this news.  I knew that speaking in front of groups was going to take most of the team members out of their comfort zone.   I went back to our foundational truth...Show up
Be spiritually prepared
Do whatever is asked of you
SERVE, SERVE, SERVE
Trust me...Trust Him.