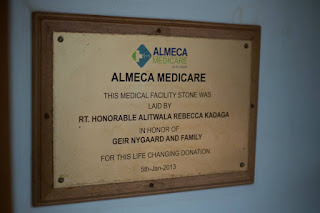 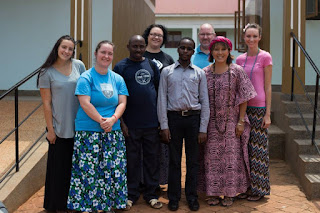 The team was thankful when I gave them an extra hour to sleep in!  We met for breakfast a little bit later because our first project was not until 10 am.  After having such a full day on Wednesday, the extra hour made a difference!

Another project that Godfrey added to our schedule was confirmed after I arrived last week.  He asked if we could visit the “hospital” where our children attend when they are sick.  He said not only would it be a good experience for the team, but it was important that the staff meet me while I am in town.  The way that health clinics or hospitals work are you must pay for any medical assistance in advance or you will not be treated.  I asked Godfrey what happens in general if someone is really sick but has no money to pay.  He said that is a problem in Uganda because so many people can not afford treatment.  They are turned away and many do die because they can not get proper help.  This is mainly a problem for things such a malaria, typhoid and other serious conditions where they will not recover without medicine.   The question came up because recently Vivian was extremely ill.  The cost was high for an emergency visit to the hospital.

Godfrey has developed such an important relationship with this hospital that they know we will always pay our bill.  The trust that he has established with this hospital as well as another clinic is so strong that they allow us to carry a balance knowing we will always pay.  This is huge for us.  Recently I discovered that managers in the past were not trustworthy and caused our reputation with other clinics to be damaged.  This hospital loves Godfrey and the children of Raining Hope.  Godfrey wanted to introduce me to the staff which helped to elevate our trust with them to another level.  It was also good for us to see exactly what kind of medical care our children are receiving when they are ill.

I was highly impressed with the facilities and the staff.  On my second trip to Uganda, I had the privilege of working on the Western side of Uganda in a town called Mbarara.  I was visiting various hospitals and clinics all over the western region.  The group wanted me to help them determine if building a hospital to care for children with malaria was needed and feasible.  I tell you this because my mind went back to that trip which was 9 years ago. I can’t even count how many clinics and hospitals I visited.  I can confidently say that the hospital we visited this day for Raining Hope was one of the best of all that I have seen.  There was no comparison to the excellence of care.

Here is an account from one of our team members who wants to work in the medical profession,

“As we pulled up to the hospital it was very nice, not the kind of clinic you picture when you hear third world health clinic.  We were greeted by a doctor in the office who took us around on a tour.  The hospital was not overcrowded at all.  It gave everyone comfort knowing our children are well taken care of.  It is a very sterile environment and is well stocked and prepared for emergencies & any other health concerns.”  - Melanie

I was impressed with the way the various wards were set up.  There is always a women’s ward, men’s ward and children’s ward.  Each one is kept separate.  There were a few patients in one of the wards.  At the end of the tour, we were given the opportunity to go back and pray with the patients which Godfrey led.  One was a little child who looked like he was undergoing treatment for malaria.

We were taken into the “theater” which is what they call the surgical ward.  It is a sterile environment and we were asked to wear what looked like typical “Crocs.”  All of us were able to walk into the surgical theatre to see where more simple surgeries are performed.  Anything that is more complicated are referred to the main hospital in Kampala.  Recently, our Annet had been dealing with a major back issue.  This is the hospital that treated her.  We are thankful she had a place to go to that took such great care of her.

Dr. Michael, our tour guide took us into the radiology ward.  They had very updated x-ray equipment.  In one room we found two doctors who had x-ray cells lit up on a board trying to determine a diagnosis.  They also do screening for women for breast cancer.  They can handle very basic illnesses but if it is more complicated they refer to the larger hospital.

This facility also had a dental ward.  As we came upon this part of the tour, Dr. Michael had opened the door to a room where the dentist on call was just about to pull a tooth of a young women sitting in a dental chair.  Dr. Michael said, “Come on in, come.”  I don’t know about you, but if that were me in that chair, I wouldn’t want an audience!  But some of us came in and met the dentist who talked to us for a few moments.  I noticed that the woman was on the verge of tears and shaking.  So as we walked out, I asked if I could pray for her.  She had agreed and I took just a quick moment to offer a prayer of peace.  Later on I saw her sitting in the hallway and she said she felt better now that the pain was gone.

We also talked to Dr. Michael about one of our children, Jonathan who wants to be a doctor.  This doctor also teaches classes at the university in Kampala.  It was good to hear the path that he took to get his doctoral degree.  He was highly encouraged to hear about Jonathan and his medical aspirations.

We were also able to pay down most of our balance that we were carrying at the hospital mainly due to the recent emergency we had with Vivian before I came.  They are an amazing group of doctors and administration who are thankful for Raining Hope.  I am so thankful for Godfrey.  It is very apparent that he is out in the community developing relationships in the name of Jesus.  He is extremely respected and honored which brings a huge sense of peace to me.

We headed back to the hotel for lunch and a time to debrief our hospital visit.  We also had time to prepare for our second day of door-to-door evangelism.   I will continue this story in the next update!