Wednesday
Two more days have past and it is hard to believe all that has happened since the last update.   When I woke up on Wednesday at the hotel, I was marveling at the fact that I was in my Ugandan home.  I suddenly realized that since it was Wednesday, there would be the hotel fellowship/prayer time.  I quickly got ready and skipped breakfast and went straight to the fellowship.  By time I arrived, they were already praying.  I was ready to sit and listen to whoever was to share that morning.  To my surprise, Sarah said, “We are so glad to have Sister Eydie home!  She will come and share with us now!”  I have learned to always carry my Ipod and speakers!   Whenever I have a team with me, I always have tried to convey that we need to be ready to share at a moments notice.  That is true of me as well!  We had a great time together studying His Word.

When I went back to have breakfast I ran into a lot of my family and friends here at the hotel.  It is always like a big reunion for me!  You know you are home when you have the famous Uganda Spanish Omelette!   Godfrey came and we were able to spend a few hours going over the plans for the upcoming two weeks.  So much of the planning for the service project happen once we are face-to-face.  It is plenty of time to get everything done!

In the midst of our planning, we received a call from the home that one of our children was having an issue.  She has not been eating and was very ill.  Her mum was there at the house wanting to take her home to see if they could get her to eat.  This was not going to be in the best interest of the child because the home situation for her is not the best environment.  Godfrey and I rushed to the house to negotiate with her.  I asked her to give us a week.  If after that time there was not improvement we would reevaluate.

We then took her back to the hotel to try and just get some soup.  She actually was able to eat. Little by little she was gaining some strength and energy.   We continued to keep her with us as we went into town to buy supplies.   It gave us opportunity to talk with her and discover more behind why she is feeling the way she is.  By time we got back to the house we saw a great improvement.

When we went back to the house, I was still in amazement at the beauty of the new perimeter wall and gate.  This time I was able to see it in the daylight.  We really have been blessed with a large compound!  The wall just looks like it goes on for miles and miles!  Ha!

When I arrived earlier, the children were all at school.  But this time, they were all home and came rushing to the van!  They come running and shouting, Mama Kisakye with smiles and waiting hugs.  I can’t even get out of the van without at least 3-4 hugs while I am still sitting in the seat.  I literally was almost carried out of the van in their arms. Such love is so difficult to put into words.

We were in the house no more than 5 minutes when we heard that just before we arrived, Vivian had fainted.  She is the one who has been sick and required medical attention.  They had taken her into their room to lay down.  By time I went into the room there were already 4-5 girls attending to her.  We had determined that she had not eaten all day.  Together with the fact she had recently been sick, not eating had weakened her body.  What happened next was a beautiful picture of the way the body of Christ should work.  As Vivian laid in bed, I watched the tenderness of all of the girls in the room care for her.  We had just brought back some yogurt with the other girl who had been with us at the hotel.  So I asked to use that yogurt while Godfrey went out to go buy more plus some other food and medicine.  We sat Vivian up who barely could move.  I fed her three spoonfuls of yogurt which she barely could get down.  She asked for water because the taste of the yogurt was too strong.  After she had at least that much down in her stomach she closed her eyes.  I was holding her on one side. I had four other girls on the bed surrounding her.  Our older Joan especially was the main one speaking words of comfort to Vivian and caring for her like a mum.  Annet sat at the end of the bed.  In the midst of the quiet while we waited for Godfrey, I asked if we could just sing some worship songs.  We then began to sing chorus after chorus.  We filled the room with praises to the Lord.  When Godfrey came back in, Vivian opened her eyes.  She was still weak, but very alert.  We gave her the medicine, but also some solid food.  She was able to eat!  She actually did really well getting down a good enough amount of food.  We watched her strength and her smile return.    The mood in the room because joyous as we watched our Vivian go from being too weak to open her eyes, to laughing and eating.

As I walked out of the room, the girls were moving her to prepare her to come out for evening devotions.  The way that these girls tended to their hurting sister, was one I will not forget.  It is a picture of the family that I have at Raining Hope.  They immediately rush to help one another if they fall.  They do what it takes to get them back on their feet.  They offer the tender care of Jesus.  I watched as they became Jesus to Vivian by doing what He would do.  It was inspiring to be a part of.  I am so proud of my children.

Our time in evening devotions was powerful.  Both situations today became the foundation of what I shared that night  It was a time that strengthened our family.  We saw the power of the working of the Holy Spirit.  One of the things that I emphasized was the power of words.  Part of the issue the one girl is having is words that were spoken against her by some at school and her own family.  Those words have cut to the core of who she is.  As I discovered that truth when we were helping her that afternoon, we used that as a basis of our devotion.  I had our kids bombard her with words of affirmation and love.  She was beaming and giggling ...especially when one of the younger boys said, “You are lovely.”  We all burst out in laughter because it was so sweet!  But as I closed my time of devotion, I stressed the importance of each of us using words of affirmation on a continual basis.  I said, “So as we close, I want you to go to each person here and say something encouraging to them...GO!”  It was an amazing moment as I watched them rush to one another with words such as, “You are beautiful!  You are the daughter of the King!  I love you!  You are lovely!  You are precious!”  It went on and on and on.  They were hugging and laughing and smiling.  Even Vivian was there through the whole devotion time.  I watched her gain her strength back little by little.  To fast forward...this update is the activities that happened on Wednesday.  Yesterday (Friday) she had improved greatly!  More about this in the next update, but I wanted you to rest assure that she is doing much better.

Each night when Godfrey brings me back to the hotel, we both sit for a moment amazed at all that we witness happen in one day.  We pray and thank the Lord and most of the time are just speechless.  Thursday and Friday both have amazing stories to tell.  I pray that you are sensing the awe of what He is doing by joining this journey remotely.  I am experiencing God in ways that I want you all to be a part of.  Thank you for joining me & my children on our amazing journey!  To God be all the glory!

More in the next update!
mama eydie kisakye!

Here are pictures of the wall...before the plastering and after.  We decided to plaster in order to preserve the bricks.  It will last longer this way.  It increased the budget we had for the wall, but it will be worth it in the long run.   More pictures will be included in the next update! 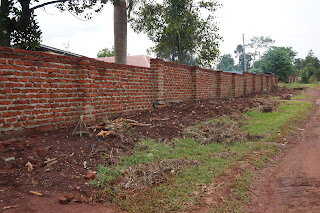 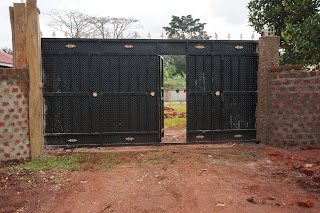 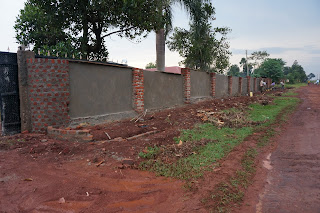