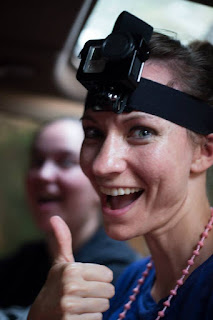 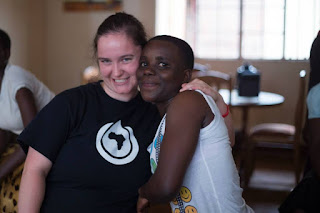 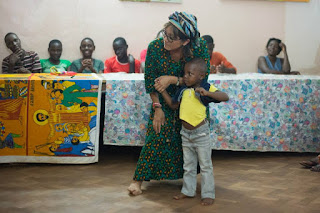 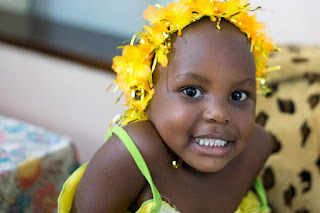 After our successful ministry at the school, we went back to the hotel to get ready to go to the home for the first time!  It was so exciting!  Not only was the team going to see the children, but they would also see our new home for the first time!  As we approached the house, we turned the corner to see the beautiful new perimeter wall.  We also had new lights installed along the top of the wall.  We entered through our beautiful new gate and approached the house.  A few of the children saw the van pull in.  They began to shout, “Mama! Mama!”   As we came to a stop, the children were just starting to come to the side of the van.  Before I knew it, Pastor Doug whipped open the side door and the children who were standing there began to cheer!  The others then realized the team was here and began to greet them with love and hugs.  I got out of the van and saw the warm welcome that my kids were showering on the team.  I took a double take as I saw Desiree hugging kids but with something on her forehead!  Turns out, Shannon had brought a “Go Pro” camera and Desiree volunteered to wear it to get some unique video footage.  I am sure the kids wondered what in the world was on her head!  We joked saying they might have thought she had gotten injured and was wearing some weird brace!  They didn’t seem to care...they were all just happy to see the team!  As we went inside, we spent this first day back at the home just spending time in fellowship.  Most of the team became reacquainted with those they met last year.  For Melanie, she was able to meet the kids who she had heard about and prayed for.  We had a time of praise and worship where we sang and danced.  I had also made today, Melanie’s “Golden Day!”  For those that are new to my updates, I choose one person each day to honor with their “Golden Day.”  I bring their favorite snacks and give them some special little gifts.  They wear a “golden” lei that signifies to others that today is their special day.  The home and the hotel all know what “Golden Day” means.  As soon as the kids see who is wearing the lei they begin shouting, “Golden Day!  Golden Day!  Golden Day!  Golden Day!”  It is the responsibility of the team members to spend the day encouraging that person.  So the kids had fun meeting Melanie for the first time and also encouraging her with her Golden Day! Here are some words of encouragement from Shannon about coming back to the home...“In preparation for my second trip to Uganda, I had some preconceived ideas of what to expect from the culture and from the children of Raining Hope.  But after arriving, the hesitations and fears of the unknown were no longer inside of me.  Upon arrival in Uganda, the atmosphere was so familiar, almost like it had been mere days since I had last been here.  The place we stay at was just as I remember and the food was also the same. There was, however a difference that I had not expected.  I noticed the difference when I visited the new Raining Hope “palace” for the first time.  There was a change in the children that was very dramatic.  They seemed to be more confident in themselves.  The joy that has always been on the inside of them was now overflowing into everything they were doing.  They also seemed to have matured spiritually in so many ways.  This new “palace” is not simply a new house to them.  It is a testimony of God’s love and His faithfulness.  There is a new sense of freedom and security.  They see all that God has done for them as a miracle.  What once seemed impossible, they now see within reach as they look at their futures.  They have seen first hand that with God all things are possible.  They are beginning to reach out in their schools telling others about Jesus.  I am so touched by them.  Returning to Uganda has been such a blessing to me.  I’ve seen a change in the kids that only God can bring.  I can not wait to see what else God will do through the children of Raining Hope.  -- Shannon Our first night together was amazing.  We had had a very long day.  But being with the kids gave the team a second wind.  Last week when I was here by myself, I taught the kids a new word...”aloha!”  One of my former ISP students had taught the kids some Spanish.  At times they still say, “buenas noches” when we leave.  Since I had just left my family in Hawaii, I thought they should also learn, “aloha!”  So now when we leave at night, they have begun saying, “aloha!”  I also added the word for family which is “ohana!”  So as we drove away that first night, the children all gathered around, waved and shouted, “aloha, ohana!”  Hawaii in Africa...two families dear to my heart! Aloha Ohana! mama kisakye ekie (eydie in hawaiian!)
Posted by Eydie Miskel at 1:26 PM