Update #12, July 11, 2012
I have been home now for just about 2 weeks.  After being gone for 5 weeks, It has been nice to be back with family and friends.  Adjusting back to American life has been difficult.  But I have been blessed with a lot of time to rest & relax.  My adjustment back is not about jet lag.  It is more about having the ability to process all that the Lord does on each trip.  This was such an amazing journey that it has taken me some time to just soak in all that the Lord has done and taught me.  After getting home I was able to go to the doctor and get the needed medicine for my cough.  I am finally making it through most of the day without the persistent coughing!

On the last day of the convention I finally felt well enough to go exploring a bit.  I decided to try and find the beach area where the Busan Aquarium was located.  After the convention ended, I set out to explore.  I thought with a map in hand I would find my way.  As I was standing near the convention center, a young Korean lady named Jessica began speaking to me in English.  Most of the Korean people I encountered, especially those I would meet on the street spoke to me in Korean.  Turns out, she had moved to Seattle, Washington for about 3 years before returning to Korea.  I think she welcomed the opportunity to practice her English!

I discovered if I were to walk to the Aquarium it would take about an hour.  So Jessica began to walk with me to show me where to take the bus.  We ended up getting along so well, she took me to the beach area by taxi!  It ended up being a nicer afternoon with a local friend.  We had a traditional Korean lunch at a booth at the beach!  She also took me to a great place along the cliffs to take photos that I would never have found on my own!  As we got to know each other, we discovered that we were both born again believers.  She attends a fairly large church in Korea.  She has given me information so I can listen to the messages online from her church.  The only regret we had was that we didn’t meet one another sooner!

I had also made friends with the young couple who owned the “Yellow Ribbon” pretzel shop.  On my last night, I went by to say goodbye & gave the wife a necklace from Uganda.  She was so happy she began to cry!  The next morning, they opened up their shop one hour early so we could say goodbye to each other!  They had coffee waiting for me & even made a pretzel to go!  She as well gave me a pair of beautiful earrings. 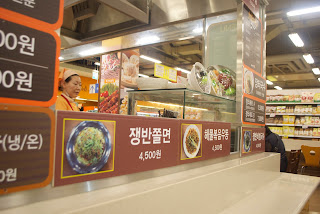 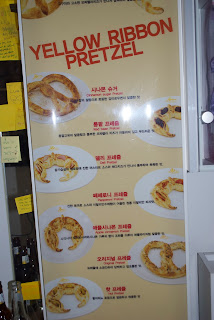 I am glad I ventured out on my last day in Korea.  Normally when I leave Uganda and come home to America, I deal with reverse culture shock.  There must be a new name for what I experienced on this journey.  To leave Uganda and not only go to another country, but to a Lions convention that had every culture imaginable in one place was very challenging.  What encouraged me was the great work that the Lions organization does throughout our world.  Lions Clubs International is a great humanitarian group that meets the needs of many people.  The best part of the convention is always seeing my friends from around the world.

My journey home took me through the airport in Tokyo, Japan.  The person sitting next to me on the plane to Los Angeles was a Japanese woman from Japan.  We had interesting conversations about family, religion & the devastating earthquake last year.  She is in America now for 3 month visiting friends.

While I was in Uganda, I got word that Kiana was accepted to California Baptist University!  So two days after I returned home, we went to CBU for a “Step Ahead” orientation for new students.  Kiana is very excited about starting CBU this fall.  I made it through most of the day just fine.  I started to fade towards the end of the afternoon!  It was a good thing that Michael drove, so I could sleep on the way home!  I also had to pick up my bags from Camille & April that I had sent home with them from Uganda.  It was good seeing both of them for quick hugs!  I also saw one of our other team members, Elizabeth & her boyfriend Cam who happened to be at the University that day.

It has been good to be back home at Saticoy Church!  I have been able to worship there the last two Sundays.  I miss the worship in Uganda whenever I come home.  But the fellowship at Saticoy is so sweet & the Holy Spirit is so evident.  It felt good to come home to welcomed hugs and well wishes!

I will be sending out a separate update as to the needs of Raining Hope.  We are in need of continual prayer for the children and the direction the Lord is leading us.

Thank you for going on this 14th journey with me to Uganda. Thank you for your prayers and your support.  I appreciate each one of you. Each one of you has a specific part you play in my life as I travel on this journey.

I was reading a newspaper article in the Ventura County Star.  There is a new Disney exhibit at the Reagan Library in Simi Valley that just opened.   I saw a Disney quote that seems to sum up what the Holy Spirit is saying to me...

“It seems to be that we have a lot of story yet to tell.” - Disney

I will be sending out the July Newsletter by this weekend.  But we have had a need arise that we request your prayers.

The Lions Clubs International Foundation is partnering with the Measles Initiative to support a world-wide effort to protect children from measles and strengthen routine immunization services. The partnership program is jointly funded by LCIF and the Bill & Melinda Gates Foundation.  If you want to read more about what this initiative you can go to this link...
http://www.lionsclubs.org/EN/news-and-events/newsroom/release-206.php

The upcoming newsletter will have other prayer requests regarding Raining Hope.  This is our most immediate need.

Thank you for your prayers for our children.  They are precious in His sight.
Kale,
eydie kisakye!