Sunday was a glorious day!   I went to Amazing Grace Church in Bukaya for their 8 am service.  This is the church our children attend.   It turned out the previous week had been Women’s Ministry week.  They were in charge of the service that morning.  They had a dear sister in Christ was brought the morning message.   She used a phrase that continues to echo in my heart.  As she read scripture and shared His message she said, “Pay close attention.”  For me that comes directly from the Lord this week.  “Pay close attention.”  What would happen if we did that on a daily basis as we walk through our day?  The Lord has so much He wants to teach us if we would just “pay close attention.”

The services last a couple of hours.  But the time passes so quickly!  Before I knew it was time to leave!  Pastor Richard had me greet the people and then sign a song before I had to rush out to the next service.

I was invited specifically to attend Revival Christian Church this morning to worship in their new facility.  When we were here in May/June last year, the ISP team was able to ministry at RCC on their last Sunday at their previous site.  We did not have an open Sunday to return to their new land.   But today I was so glad to have had the morning to be with my family at RCC.  The land they purchased it close to Bujagali Falls not far from Jinja town.  We actually got lost on the way!  Godfrey thought he knew where it was.  We all had an idea but no one had clear directions.  Out here it is not as if you turn on your GPS with an address to plug in!  We end up just moving along the road and stopping people who may know where the church is.  We go more by landmarks not street names.  We ended up at another church before being directed to the right one!

I had a similar experience as when I drove up to the new home.  The land the church has purchased is beautiful!!!  It took my breath away.  They are in an open air facility. As we parked and walked towards the service, I could hear Andrew from the hotel making announcements.  Greeters quickly come and meet us, gathering my bags and ushering us to the front row.   I literally had sat down and Andrew says, “I want to give an opportunity for Sister Eydie to come and greet us today!”  After the short greeting, Andrew said, “I think that we need to have Sister Eydie share a song with us this morning as well!”   Being flexible is important here!  Since I had already signed the one song at Amazing Grace, I was ready! 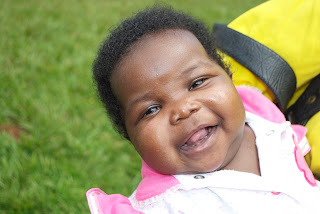 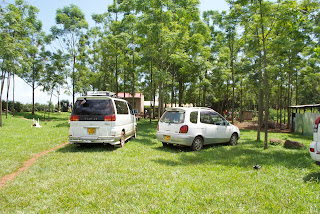 The message that morning was also one delivered by a dear friend, Rebecca!  I had just come from a service with the message still fresh that I am to “pay close attention.”  Then  to arrive and have woman as the one bringing the message.  Raining Hope is increasing becoming a ministry called to work with women.  That is something that we are paying close attention to.

As the service concluded I was greeted by some many of my dear friends.  Andrew’s twins, Mary and Martha have grown to the point I didn’t realize they were his children!  Last time I saw them in his home they were babies not even crawling!  Now they are are walking around with their brother, Sean!


The sad bit of news is I was told that my sweet friend, Pastor Joshua recently passed away.  For those of you who have come with me to Uganda, you will remember Pastor Joshua as the one who arranged boda boda rides for us.  One ISP team was able to visit him in his home.  He had gotten into a boda boda accident about a year ago.   But his death was due to some other health complications.  I have known Pastor Joshua since my first visit.  I will never forget on my second visit he wanted to send me home with a gift.  He came to the hotel with a large “pumpkin.”  He insisted that I could carry it onto the plane and take it home!  I didn’t have the heart to tell him that they probably wouldn’t allow it.  So I graciously accepted it and the children at the home enjoyed it that evening!   Many fond memories of my friend who I will miss very much.

I actually didn’t make it back to the home that evening.  After lunch and a meeting at the Sunset Hotel next door, I didn’t have a way to get to the home.  This trip is a challenge for me as I am faced with a lack for transportation.  Because of the staff changes that we have made, I have lost the person who normally takes me where I need to go.  The other person who I also have hired to drive me places is busy with another visiting team.  This is causing us to have to hire taxis to get me to and from the home.

This challenge is causing me to have less time with the children at the house this time.  Please be in prayer as we would like to purchase a van for the home.  I have been told that a van could be anywhere from $6,000-$9,000.  It is greatly needed for the ministry.  Pastor Gerald is doing an amazing job with the home.  But he continues to travel by boda boda everywhere he goes.  His commitment to the children is truly an inspiration.  I discovered the other reason this is critical is if one of the children fall ill in the middle of the night.  To try and find transport is next to impossible that late.

So the inconvenience of my not having consistent transport this trip is showing me the need of having our own vehicle.  Please join me in prayer that God would provide.

Monday I began the process of meetings to get direction as to what we needed to do regarding the new home and the new land.  I had a great time with Robert Otile who is helping us me with much of the work.  The vision that the Lord has given us regarding our land and the future work of Raining Hope took on a new direction.  Robert was able to open my eyes to some new ideas that are expanding our possibilities.  The more he shared about what would help the people the most, the louder the phrase “pay close attention” became.  I am not ready to share yet all that we discussed.  It is all in the dreaming and amazement stage!  But I do ask you to continue to pray for Raining Hope as what is coming is larger than I think any of us imagine.  Pray for wisdom and discernment from above that all we do would bring glory to Him alone.

When I arrived at the home that afternoon, I was able to spend a good bit of time talking to our cook, Loy.  I have never really spent this kind of time with Loy before.  This is one of the benefits in my trips when I travel alone is I have more time to have one on one meetings.  I am sorry that I have not taken the time to do this with Loy before.  As I asked her to share her story with me, my heart broke at the hardships that she has faced most of her life.  At the end of the story she was so thankful that we have given her a chance of being a part of a real family that is providing for her children.  She said that she never thought that her children would have the chance for a future.  Loy thanked us for giving her children hope for a promising future.  You see now why I was sad I had not taken the time to have this conversation with her before now.

The other thing that broke my heart was when I talked with her son Elijah.  I was just trying to encourage his little heart.  But I too asked him the question, “Do you have anything else you want to ask of me?”  He quietly whispered something to his mum that I could not hear.  She then said to me, “He wants to know why his father left him.”  My heart just dropped to the ground.  As I began to talk to him, he began to weep.  I have never seen Elijah cry like this.  As I tried to bring words of encouragement, I was led to tell ask him if I could have Pastor Gerald talk to him.  You see, Pastor Gerald and his family will be moving into the home.  We have made Pastor Gerald our new manager to oversee Raining Hope.    He will bring to Raining Hope something that was dearly needed...the example of healthy family for the children to see.  Pastor Gerald became the example of a loving, earthly father to little Elijah that day.  The two of them talked for some time.  It is going to be a process for Elijah.  But I am beginning to see the pain and bitterness he was carrying being peeled away. Elijah has been different since Monday.  He is smiling bigger than I have ever seen before.  He is full of a joy that can only come from the Lord.

These are the things I am “paying close attention to” as I walk through this week.   A new day is dawning.